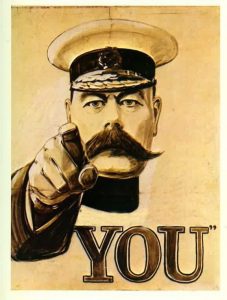 The first thing you should be taught in any first aid course is that you, the person offering medical intervention, are the single most important person in the entire incident. You. Closely followed by the casualty.

That’s why every approach to any incident starts with a big capital D.

D for danger, danger to you and any further danger to the casualty.

Anything from speeding cars at road traffic collisions to falling rock in the mountains, danger is all around us and the risk of tunnel vision at an accident site is extremely high as we approach our incident scene, concentrating on our casualties.

It is not good enough to assess the dangers on approach and then forget about them. Danger needs to be assessed on a constant and ongoing basis.

Saturday was a classic example of just that.

On Saturday I spent the day at an event for the general public looking at providers of skills based training and advice for enjoying the Scottish outdoors safely. Venture Medical UK were there demonstrating equipment and techniques as well as answering event goers questions on all things first aid.

Rather ironically, but to be expected as by my previous history of being on hand at incidents would show, there was a male collapse at the event which I dealt with. Fairly straightforward collapse and subsequent seizure. No damage done and the male recovered quickly and suitably enough to make his own way home with his partner.

The rest of the well-attended event passed without further incident and I set off on my homeward bound trip looking forward to putting my feet up.

Just when you least expect it…..

Saturday was a beautiful day and I’d been inside missing the glorious weather. As I left the motorway for the remaining two-mile journey to home I put the car window down, enjoying the fresh air. As I travelled along the A class road my attention was immediately drawn to a silver vehicle just coming around the bend towards me at considerable speed. That’s the first thing I noticed. The second was that it appeared to be drifting ever closer to its nearside kerb. The gap between us was closing.

As we drew level there was an almighty bang. I continued past and in my rear view mirror saw the dirt kicked up as the vehicle mounted the kerb colliding with the crash barrier before bouncing across the road, side on, then I was around the bend and everything behind me was out of sight.

I immediately stopped my car and turned it around, the big D for Danger immediately came into play, flashing my lights to oncoming cars to warn them. As I drove back down the road I knew that past experience of vehicles travelling side on at speed and out of control normally resulted in them rolling over, and I knew that there had been cars immediately following behind me so I expected the worst. My mind was already racing as I tried to ascertain what equipment I had loaded in the back of the car.

As I covered the short distance to the site I was relieved to find that there were no other cars involved. The silver one had managed to stay on all four wheels but had crossed both lanes of traffic, mounted the pavement, crossed a grass verge and was now at an angle up a slope and into a hawthorn hedge. 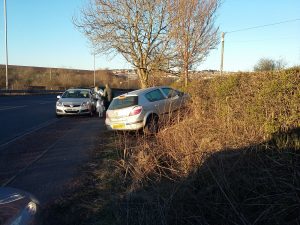 I brought my car to a halt completely on the pavement and off the road as in the circumstances it was the safest place to be for me and other road users and made my way to the car checking for any signs of fire and trying to gauge how stable the vehicle was in its resultant position.

By now the driver was trying to exit the vehicle, hampered by the deployment of side and front airbags and the angle of the car at the hedge. He stumbled out of the car as I drew level, looking shocked and dazed, however, there were also sounds of screaming and crying from inside the car so a cursory shout to see if he was ok was followed by me making my way to the passenger side of the vehicle. Again checking the stability and looking for any signs of smoke or fire, I forced open the passenger door to find a five-year-old in an incredibly distressed state but with no visible injury.

We were joined now by the driver, her father, and I explained who I was and asked permission to give her a check over to make sure she was ok. I also asked a bystander to call an ambulance and let me know when it had been done.

I was able to ascertain there was no injury to the child. Ambulance called, you’d think the Danger would end there………….

Alas no. And it came from somewhere completely unexpected!

I was sitting side on in the floor well of the cars passenger side, my feet on the ground outside. The child was still in the booster seat.

I got the child from the car and handed her out to dad. In the drivers foot well I could see an opened bottle of beer. As I lifted it, some poured out.

It initially began verbally, demanding I leave the car, being confrontational and telling me it was known of my business. I knew an ambulance was en-route and at that point, the pedestrian who was calling for one was still on the telephone.

I took the phone from her and passed the new details. The driver was drunk and I needed the Police.

Seeing me on the phone the male now came towards me, this time more aggressively than confrontational, and tried to take the phone from me.

I told him to remove his hands from me and warned him, in no uncertain circumstances, of the consequences if he did it again.

Seeing his aggression was getting him nowhere he changed tact. Now he just wanted to get a taxi and leave the scene but his phone was out of charge and unsurprisingly no one was offering theirs.

The ambulance subsequently arrived and checked them both over, Thankfully, and perhaps somewhat miraculously, neither were injured.

The Police also arrived and found him to be more than three times the legal limit.

It was the second incident I’d dealt with that day and they couldn’t have been more different. It shows that the assessment of a scene does not stop following the initial approach and the importance of continual assessment as that incident develops. I was confident and experienced enough to deal with the subsequent danger from an aggressive, drunk male but what if you weren’t?

Walk away. YOU, the first aider, the rescuer, the good Samaritan, are the most important person.

Sorry, no Tweets were found.